The surest way to secure all your data is to save them on multiple devices or platforms. This expert reminder certainly stands true up to this day. Nevertheless, restoring months or years-old backups could take hours, especially if it involves loads of data. Add to that the downtime which resulted from restoring lost data in one or several of your backups.

To address these concerns, a technology called RAID was developed so users can survive drive loss without losing any data or experiencing downtime. If you’re wondering how or what RAID is, keep reading as I’ll do my best to explain to you what you need to know.

According to them, there has to be an arrangement that’ll solve the issues associated with single drive storage which was then called Single Large Expensive Disk (SLED). The issues were that: (1) SLED cannot keep up with the speed of the processor, and (2) failure in SLED means failure for all data in the disk.

The RAID researchers theorized that the inherent weakness of mainframe disk drives popular at that time can be addressed by spreading data across multiple drives. This new technology introduced was also believed to improve the system performance of disks as well as cut the cost of power consumption. This can all be done through an array of ‘inexpensive’ drives that can be configured to far exceed the capacity and performance of a large single drive.

RAID was, however, only among the many storage devices of the time using the same technology. Other options like the Just a Bunch of Drives (JBOD) and concatenation/spanning offer similar services. The former also uses multiple disks in storage, thus increasing storage capacity. However, it does not have the same performance benefits as RAID as their drives do not have the same tolerance. It is likely similar in concatenation which also combines several disk drives into a single drive to increase storage. Yet again, it didn’t offer the same speed and reliability as RAID devices.

How Does Raid Work? 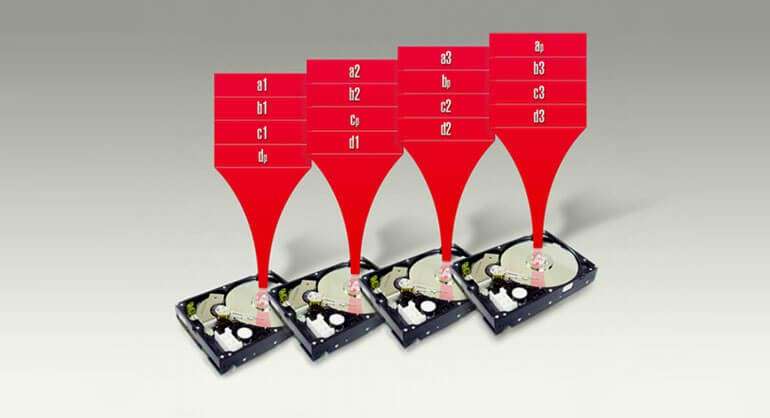 Hard drives all have physical limitations due to their mechanical nature. Because of the same reason, they are reported to have higher failure rates than SSDs and are generally considered less reliable in storing data. Regardless of the brand, hard drives often have a 5% chance of failing during its first year of use. They are also not expected to last longer than SSDs. RAID aims to address all these issues.

The idea behind RAID is simple – multiple disks will be put together, creating a single array that contains all shared speed and reliability features of the bonded disks. The result is a multiple-disk hard drive that’s able to store more data and display faster read/write functions. The end goal is to attain the capacity and performance of much more expensive disks at lower costs.

Now, the capacity and performance you’ll get from RAID depend on the type of RAID level you’re trying to achieve or the performance requirement of your device. Each level of RAID provides one, some, or all of the following: capacity, performance, reliability, and availability. The levels are mainly classified as either Standard, Nested (Hybrid), or Non-standard. Read on to understand their differences.

There are six standard RAID levels ranging from RAID 0 to RAID 5. They vary in their storage capability, performance speed, and security.

Raid O spreads all data into two or more disks in a strategy called data stripping. This means that if you have two disks, both of them share equally the same amount of variable data. Doing so will also divide the amount of speed required to run the data, hence making your drive perform at much faster speeds. You also get to combine the capacity of both drives, so if each of them has a 500 GB capacity, you’ll have 1 TB of data storage in a single 1TB drive.

RAID zero doubles or triples your drive’s speed, but it is not without a downside. If one or both of your striped drives fails, you will lose all your data. This is the very reason why RAID O isn’t commonly used for storing valuable files. You can, however, choose to set it up on your desktop with data that are not as valuable.

RAID 1 eliminates the disadvantage brought on by RAID 0 by creating a full backup of all your data stored in one of the drives. The process is called mirroring which involves writing data simultaneously on two or more RAID 1 drives. As a result, the stored data is completely the same in all drives.

RAID 1 is more commonly used in the real world as it proves to be more reliable in storing data. When one of your drive’s fail, you’ve still secured all your data on the other disks. However, it takes such a long time to rebuild the affected data array with a new replacement drive.

RAID 2 is no longer used for commercial purposes as it does not have any significant difference with RAID 3 anymore. Regardless, the idea is to bit-strip data across all disks, thereby allowing some to store Error Checking and Correcting (ECC) information.

RAID 3 has essentially the same function as RAID 2 which stores byte-striped data using a parity information. It is essentially the information for data recovery which is calculated and recorded on the drives. Although not widely used, RAID 3 can be useful for single-user systems with smaller data transfer.

This is another similar drive system that stores parity information. It is essentially the same as RAID 3 but uses block-level striping which does not require data sharing in all parity drives. As a result, execution is faster and more efficient.

RAID 5 is another block-level striping system strategy like RAID 4, but unlike RAID 4, all parity information is distributed among the drives. Since the required number of drives is 3 to 5, the associated risks to system failure are higher. If one of the drives’ fail, you’ll still have all your data stored on other drives. However, there is a high tendency for a second drive failure as the array rebuild time takes longer which also greatly increases the chance of system failure.

RAID 6 has a close similarity to RAID 5, except for its second parity scheme. This additional parity allows one of the arrays to continue working even when two or more disks fail simultaneously. RAID 6 ensures added protection to a whole array of drives but is relatively costlier than all standard RAID drives. An additional disadvantage is its slower write performance.

The nested levels are a combination of two standard RAID levels. Because they are hybrids, they offer better speed and higher storage capacity than the abovementioned levels.

RAID 10 combines RAID 1 and RAID 0. With the performance of RAID 0 and the mirroring capacity of RAID 1, this level can cater more data and deliver at faster speeds. One evident disadvantage is the cost as the drive requirement increases with hybrid levels.

RAID 01 is RAID 0+1 which is very similar to RAID 10 but is organized differently. The process involves creating a stripe set first before mirroring it, thereby creating a duplicate set.

RAID 0+3 equates to RAID 03, otherwise known as RAID 53. It has the style of RAID 0 striping and the capacity of RAID 3’s disk blocks. RAID 03 performs much better than RAID 3 at a higher cost.

The protection of RAID 5 and the performance of RAID 0 are combined in developing RAID 50. The parity stripes are distributed so that the disk performance is improved yet the data are completely protected.

Many companies, groups, and organizations have developed their own non-standard RAID configurations to meet the specific needs of their specialized groups. This has resulted in a number of non-standard RAID levels like the following:

Linux is among the adherents of the RAID arrays. With the 2 standard RAID 1 drives and the four drives in RAID 1+0, it has created its own striped and mirrored MD RAID 10 that is both well-performing and well-protected.

RAID 7 is owned by Storage Computer Corp which is based on RAID 3 and 4. It, however, added caching and a real-time controller OS. RAID 7 offers high performance and storage that can effectively handle data storage.

Advantages and Disadvantages of the RAID Technology

The RAID technology was first translated as Redundant Arrays of Inexpensive Disks. Since the higher level parity system and hybrid RAID levels often resulted in more expenses, the original term was replaced with ‘Independent’. Nevertheless, RAID may still save you some bucks if you opt for lower-priced disks bought in bulk. 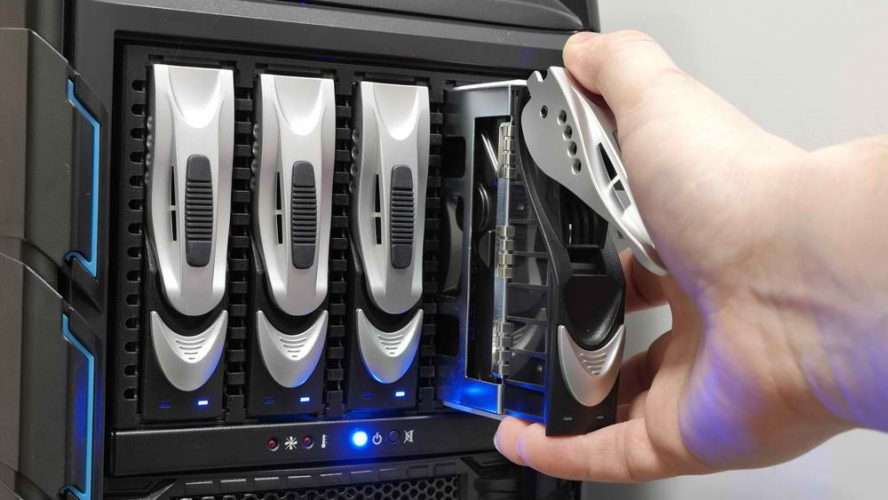 Putting its naming issue aside, RAID offers several benefits in the performance improvement and reliability of your disks drives. Depending on the configuration requirement of your device, you can make it perform faster and give it reliable protection against data loss. RAID 0, for instance, doubles the read/write speeds of your disks. RAID 5, on the other hand, has a parity drive that can monitor the health of your non-parity drives. When it finds a failed drive, it can figure out what data are stored in the drive. In addition, RAID 2 gives you security as the RAID arrays are mirrored on the other drives. Therefore, you can continue working even when one of them fails.

Among the disadvantages of RAID is probably its non-commitment to its goal to lower the cost of storage. Though it has effectively done so during its early years, RAID levels now require more disks which leads to increased costs. Nevertheless, nestled RAID levels are still well-utilized by people as they prove to be helpful in overcoming reliability problems.

Another drawback connects to a hard drive’s natural wear and tear. Since the RAID drives are installed simultaneously, they are also of the same age and condition. Therefore, if one of the drives fails, the other may soon follow.

Another concern with RAID is the vulnerability of the drives being rebuilt. While some of the RAID levels can only survive one drive failure, many implementations may be able to sustain multiple ones. When a drive actually fails, it can be replaced with another one. The problem is; during the process of replacement, the RAID arrays will be left in a vulnerable state. Now that most drives have a higher storage capacity, the time it takes to replace failed drives is longer. This means a higher chance that the drive will experience second-drive failure.

If the drives do not experience failed replacements, they may still contain unreadable data or bad sectors. When this happens, it becomes even more challenging to rebuild an array. Users, however, can still overcome this possibility by choosing the nested RAID levels. With its greater redundancy level, array-wide failure can be avoided.

The RAID technology can offer the protection and increased performance and capacity that you hope to achieve. However, do not mistake it for a backup. Drives are always prone to security issues, data corruption, and human error even when you are protected with reliable RAID implementations.

If you don’t mind a higher cost, it may be best to choose an SSD instead. It saves you from all the trouble and could outperform any RAID level. However, do not mistake it either for a backup. Backups are still your best precautionary measure against data loss and drive failure.

RAID is too complicated? Check out Best external hard drive for mac

How to Clone a Hard Drive