Within the last couple of years, Transcend has been a force to reckon with in the storage device industry. This is evident in the type of products they have been producing. Let’s take, for instance, the Transcend Storejet 300; it was a highly sought after drive for Mac. This shows how good Transcend products are.

Apparently, the new Transcend Storejet 25C3N which we are about to review will live up to expectation.

For a first timer to Transcend products, you’ll be initially blown away by the sheer idea of using some sort of luxury drive. The casing of the Storejet 25C3N carries over with that lustrous feel.

No slides are available in this gallery

The main drive is enclosed in an aluminum alloy package that radiates opulence. The drives looks like a cousin of the Transcend SJM 300. Frankly speaking, both share the same design similarities. Their internal drives are both housed in an external metallic casing which shines from a distance.

In the course of this review, we laid hands on the 2TB version. The Storejet 25C3N comes in two different storage options; 1TB and 2TB. Did I mention that the Storejet 25C3N is lightweight in all ramifications? You’ll probably forget you are carrying a drive with you because of its lightweight.

The drive comes enclosed in Transcend’s traditional white and red themed design. It ships alongside its cables, the user manual, a transcend product catalog as well as the drive’s warranty card.

Let’s have a look at the technical specifications of the product.

To be able to live up to its expectation and perform better than its counterparts like the WD Element, Transcend equipped the Storejet 25C3N for every possible task you can think of, including 4K video editing.

For our first test, we used CrsytalDiskMark. The results were quite clear and consistent. Read and write speeds stood favorably at 129 MB/s and 128 MB/s respectively. As I earlier mentioned, the drive shares the same similarity with the Storejet 300.

Aside from those results, we also achieved similar results when we did the basic day to day transfer tasks using Windows test computer. We achieved speeds of 116 MB/s transferring a folder containing about 5000 files and larger than 5 GB.

Internally, the Transcend Storejet 25C3N consists of a 2.5” Seagate HDD with an RPM of 5400. This is on par with some of the other drives in the market.

Get ready to use this drive across major operating systems. Starting with Windows, the Storejet 25C3N is compatible with Windows 7, Windows 8 and 8.1, and of course, Windows 10. Furthermore, the drive works on any Apple computer running Mac OS X 10.7 or above. That’s not all. If you have a system running on Linux Kernel 2.6.31 or above, the Storejet 25C3N will work flawlessly with it. 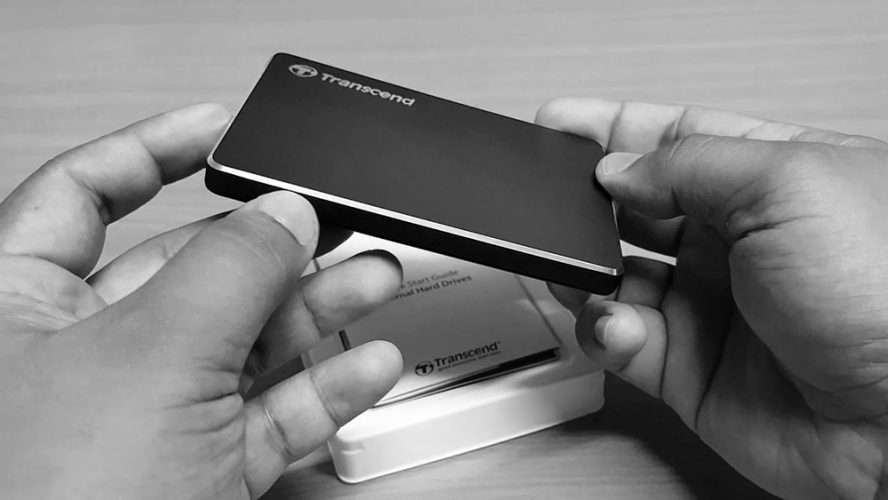 Storage wise, you’re entitled to choose either the 1TB or 2TB models. Both have 3 years warranty. This is in contrast with the 1-year warranty offered by notable drives like the WD Element – in fact, the warranty for WD element is a major downside of owning the WD Element.

Out of the box, you’ll be able to use the drive on your Windows PC. Just plug the USB 3.1 cable into your computers USB port and you’re good to go. The drive is also downward compatible with USB 2.0 devices. However, you’re bound to experience slow performance, no thanks to the USB 2.0 limitations.

Additionally, the drive ships with Transcend’s Elite software. This tool comes in handy when you want to recover your deleted files. Also, it can also be used for file backups. Did I mention that you can also use it for encrypting and decrypting your files as well as synchronizing with Google Drive and Dropbox?

In terms of ruggedness, the drive is not in any way rugged at all. This is apparently the only downside it has. When compared to the Samsung T5 SSD for instance, the Samsung T5 beat it hands down. It’s expected that the T5 will outdo the Storejet 25C3N. Needless to say that both drives don’t belong to the same class. One is an HDD and the other, an SDD. Drive manufacturers are improving on the ruggedness of their drive but more still needs to be done for HDDs.

Looking forward to buying a lightweight drive that stores up to 2GB worth of data? Look no further. The Transcend Storejet 25C3N drive is one drive that makes you smile without putting a hole in your pocket.

Having taken a major look at the performance of the Transcend Storejet 25C3N with other popular drives, it suffices to say that this drive is worth owning compared to those other drives.

The Storejet 25C3N is worth owning compared to other drives.

WD Elements external hard drive is a simple, straightforward and elegant portable device. It has a high-capacity in a ...

How to Backup Computer Files to External Drive