The LaCie Rugged Thunderbolt is a professional all-terrain solid state drive (SSD). This drive boasts toughness in the field while ensuring speed everywhere while accessing your files. Its key features, based on manufacturer’s specifications, include Thunderbolt speed of up to 387MB/s in addition to the Super Speed USB 3.0 for universal connectivity. It is also dust and water proof, shock resistant (MIL-compliant) to ensure the safety of your data even if the drive drops from a tabletop or a height of 2 meters in non-operating mode.

The LaCie Rugged Thunderbolt is an advanced drive to its predecessor Rugged USB 3.0 Thunderbolt Series. It features a sealed aluminum enclosure that is surrounded by a removable orange rubber bumper. This cover is open -facing, allowing the top and bottom to be exposed hence a sense of style of the sleek metallic drive enclosure. Although this covering makes the device slightly thick, it provides a protective casing that shields exposure to the environment.

The device’s Thunderbolt cable is permanently attached and neatly tuck into the encasement. A removable end cap protects the USB port and thunderbolt cable, and when the device is in operation, it is placed back to the unit to protect against dust and water, what LaCie specifies as a drive with ingress protection (IP) up to IP 54 rating. Even though the cap is small, detachable, and can easily get lost, LaCie provides a spare cap in the packaging.

The solid state drive (SSD) is available in three capacity models ranging from 250GB, 500GB and 1 TB, but the HDD version is available in 1TB and 2TB capacity models.It is small in size and has a weight of 350g for 12.3 oz version or 280g for 8.8 oz. This makes it portable with minimal risks involved in the case of an accidental drop. On the top side of the drive display is the LaCie logo while the underside is bare. The LaCie Rugged Thunderbolt has a classic and clean look.

The LaCie Rugged Thunderbolt is an accomplished solid state drive containing the Samsung 850 PRO drive which is amongst the finest SATA Revision 3.0 SSDs available. It is bus powered whether the device is used in USB or Thunderbolt means of functioning. Out of the box, the drive is preformatted using HFS+ and will work immediately once connected to a Mac (running OS X 10.6.8 or later) which supports for time machine backup. The drive does work with windows but in that case you will need to reformat it into either FAT32 or NTFS.

Subject to testing, the Thunderbolt connection can achieve maximum read speeds of 390 MB/s and write speeds of up to 367MB/s. The USB 3.0 connectivity, on the other hand, can attain a maximum of 439 MB/s in reading speeds and 390 MB/s in writing speed. 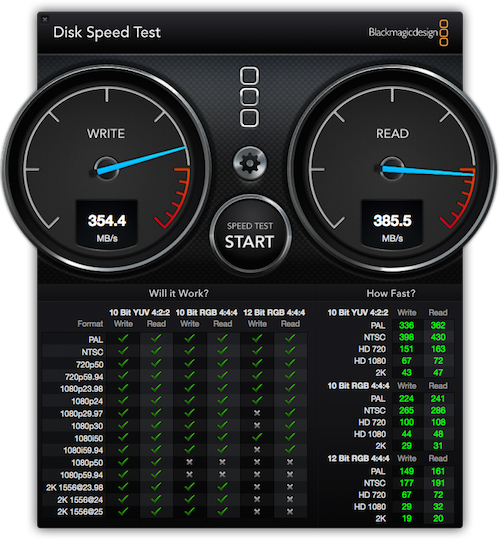 Even though the highest recorded read and write speeds of the USB 3.0 are sequentially higher compared to Thunderbolt connectivity. The average rates of data transfers of files that range from 4kB to 1024kB for Thunderbolt are 182MB/s for reads, 215MB/s for writes. The average rates for the same amounts of data transfer of files for the USB 3.0 are 197MB/s for reads, 210 MB/s for writes; this interestingly indicates that USB 3.0 is slightly faster than Thunderbolt when reading files and slower when writing.

The Rugged is specially designed for Thunderbolt connectivity as the cable is hotwired to the device with the USB 3.0 acting as a backup connection. Either way, the speeds that this device achieves using both interfaces are highly consistent.

The LaCie Rugged Thunderbolt drive in conjunction with LaCie Backup Assistant offers an easy to set up of automatic computer backup which ensures that all your files are properly stored and backed up leading to zero losses of data no matter the circumstance. The LaCie Private-Public software also comes in handy to ensure that your files are completely confidential. 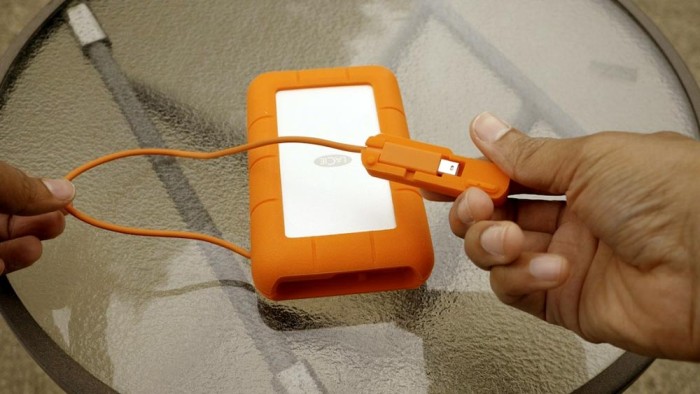 Despite all the praise about this device; on the other hand, several users on the online market amazon.com are extremely disappointed with the instrument’s quality and inadequate support system. There are a lot of complaints about the drive’s Thunderbolt connectivity with some complaining about bad cabling but was able to resolve this problem after switching to USB 3.0

This drive is mostly suitable for the adventurous and professional consumer who is after a tough storage device and values the significance of design, performance and portability.

The LaCie Rugged Thunderbolt portable storage drive has a lot to offer including great performance, superb durability and unique design. It is adequate for general-purpose and everyday data storage with its eye-catching orange rubber bumper. It is best suitable for consumers such as those who deal with multimedia workflows and consistently transfer significant amounts of data.

The new Transcend external hard drive: StoreJet 5000 is a portable Solid State Drive (SSD) is built and designed for ...