Solid state drives used to be a luxury for people with high priced laptops who wanted a flash drive with a read/write speed that was just much faster than their internal hard drives. But now that these drives are smaller and more affordable then their first generation predecessors, SSD’s are becoming more mainstream, with people who use either a Mac or Windows laptop, needing a flash drive with a fast interface. And as these models become more ubiquitous, the manufacturers who make them, will start making bigger and more powerful SSD’s with more storage capacity and hyper-fast interfaces.

This motivation is clearly the inspiration for Buffalo’s DriveStation Mini SSD. This is a monster dual-SSD storage device that’s built for maximum speed and maximum storage capacity, making it ideal for using it with daisy-chain functionality for networking multiple storage devices.

With a storage capacity of 1 TB or 512 GB (depending on what RAID set you configure it at), the Buffalo DriveStation Mini SSD has two high speed SATA III Toshiba solid-state drives inside, two Thunderbolt ports and an interface transfer rate of 10 Gbps. This makes it perfect for using in conjunction with multiple Thunderbolt storage devices and daisy chaining them off one another. You can chain up to six SSD drives to give you the highest speed and storage capacity possible. 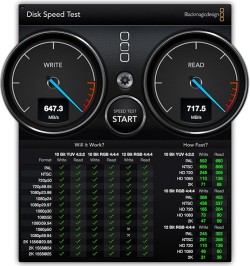 When it comes to read and write speeds, this model zooms ahead of competitors with a read speed of above 717MB/s and a write speed of over 647MB/s. This translates into it being able to up to 800 MB of data in 1.3 seconds, all without compromising your bandwidth. This makes it 4.5x faster than USB 3.0 drives and 19x faster than 2.0 drives. That’s a significant jump up from most single drive units available, Thunderbolt or USB.

This type of external storage and speed capacity is ideal for content creators and editors working on Mac platforms who have tons of audio and video files to edit and upload while under a time crunch. Though it’s primarily optimized for Mac computers, coming with pre-formatted Mac OSX software and Time Machine compatibility, it can also be reformatted to work with Windows OS.

The Buffalo DriveStation Mini SSD also comes with RAID support, which means it can provide automatic data protection. You can set this unit up as a mirrored RAID set (RAID 1) to protect your data if one of the disks fails. This means you create a second copy of your data from one disk onto the other. But you also can configure it as a striped RAID set (RAID 0) to maximize the amount of speed and capacity available so you can transfer larger files as quickly as possible. This done by evenly storing data across both hard drives with zero redundancy. 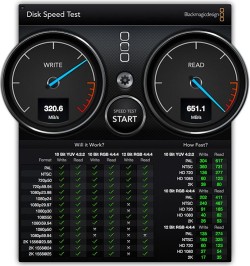 This professional grade storage device is primarily ideal for those who need to work with the fastest and most advanced hardware currently available and need a storage network that can accommodate their needs at the fastest speed possible. It really isn’t practical for personal home computing that doesn’t include high volume content creation. Basically, if you just want to back up your iTunes library and Photos gallery of your family, then you’ll probably want a cheaper, smaller portable drive.

There is no denying that the storage capacity and speed this SSD and multiple daisy-chained Thunderbolt storage devices connected to it can deliver. It does all this in a relatively small package, only coming in 8.7 x 8.7 x 4.5 inches and 2.5 pounds. Its white and silver construction ensure durability no matter where you install it in your office. It also comes with Eco Manager, an energy efficiency tool that conserves power and reduces battery consumption. Coming with a Thunderbolt cable including, it’s ideal for big jobs, not small ones.

The major downside to this drive is that its too impractical, expensive and overpowered for most casual laptops or desktops meant for personal use. It’s an office or job site monster, not a household flash drive with maybe one or two laptops that you don’t use for work. The intended, target audience is too narrow and early-adopter focused. There’s not reason to buy this unit if you only need half this storage capacity and transfer speed. A single drive storage device is plenty for most people.


Also, the cooling fan for such a significantly large model is a bit loud and disruptive for those looking for silent operation from external storage drives. This also means that having more than one of these daisy-chained in a single room will generate lots of heat. If you have six storage devices with comparable speed and storage capacity as the DriveStation in the same area, make sure that this room is either well-ventilated or heavily air conditioned. Excess heat from multiple units must always be kept at low temperature when clustered together.

Also, with it being optimized for Mac OSX, reformatting to PC compatibility is only practical if your Windows desktop or laptop comes with Thunderbolt interface ports. Since the DriveStation doesn’t come with USB ports, reformatting it for a PC device that only has USB 3.0 or 2.0 interface ports won’t allow it to transfer data to and from this device anyway. It really only works with Mac or PC devices with Thunderbolt interface functionality, so this further limits its market potential.

In the end, this is not an ideal external drive for normal household or even small offices. If you need massive amounts of storage capacity and transfer speed, then you’re more of the intended audience for this model than most are. And in such a capacity, it’s unrivaled. Content creators, system administrators, IT tech support and media producers are the kinds of users that could most benefit from the Buffalo DriveStation Mini SSD backing up their considerable amounts of data.

If you need massive amounts of storage capacity and transfer speed, then you're more of the intended audience for this model than most are.

Although LaCie Little Big Disk Thunderbolt 2 is a very expensive external drive, you will be very happy with it in ...

The WD My Book Duo is a basic desktop-class external hard drive that boasts tons of space. The massive storage is ideal ...